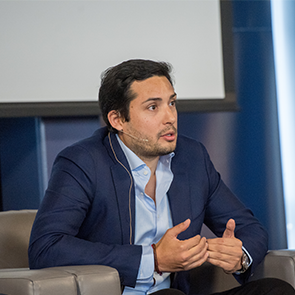 Hervé Larren discovered Bitcoin in 2013 as a way to send money to charities in Venezuela where his mother is from. Since then, he has been involved in the blockchain space as an investor, miner as well as an advisor on several projects with a market cap of over $1B. Hervé has presented « Bitcoin: The Internet of Money  » to over 12 chapters all over the world and was selected as a keynote speaker at the 2018 World Technology Summit. His article “13 Reasons That Will Propel Bitcoin” was the first article on the topic published in YPO magazine. Hervé first invested in the Metaverse in 2018 and became the co-owner in what is today the largest commercial district in the Web 3.0 Metaverse. He is currently helping businesses developing a presence in the space. Born in France, Hervé completed his executive education at Harvard Business School, his MBA at Columbia Business School and has been a YPO member since 2012.